*** Your browser doesn't support CSS - the page was automatically degraded to structure only. ***
Magyar változat 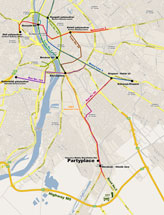 Getting to the partyplace is easiest with the suburban train ("HÉV") to Ráckeve, which starts from the Közvágóhíd (the Pest-end of the Lágymányosi bridge). You have to get off at the stop called Soroksár - Hősök tere, where every train stops. After getting off the stops, you have to go back ca. 300m-s, you can find the place at the other side of the Grassalkovich street. You can buy traintickets from the conductor on the train.
You can also reach the place from the Határ út stop of the (blue) Metro no. 3., using the bus no. 66 or red 66. (The red one is a faster one so it's advised to choose that if available.) You have to get off at the stop named Hősök tere.
Reaching the place from various major points of the city:

If this is too contrived to you, then either check the BKV site for more details or route-planning, or contact the organizers and we might be able to support you with someone who can guide you thru the city.
If you want to go to the partyplace by night, you might try the no. 966 midnight bus.
By car:
If you come by car, the easiest way is if you take the M0(E75) highway, and take the exit at road no.5. Drive cca. 2.5km heading north and you're there.